Bower Lake is a wilderness region in Fable II, which links to Brightwood and Bowerstone Market. Its most prominent feature is the large lake that dominates the area, for which it is named. Bower Lake is rumoured to be the location of the old Heroes' Guild, a rumour proven correct after exploring the ruins underneath the lake's central island, having been changed much in the last five hundred years. Bower Lake is also the location of the Gypsy Camp, where Theresa took the Hero of Bowerstone when he/she was young and was in desperate need of healing.

Bandits and beetles appear in the main areas, while the ridge beneath the Bowerstone Road will spawn a large group of hobbes, as will the old ruins behind Hero Hill overlooking the small pond. A group of Highwaymen will spawn in the trees off the path leading to the exit to Brightwood.

Bower Lake is the largest region in Fable II, so it has a number of traders roaming around. These traders sell a variety of goods, from weaponry to clothing. General goods can be purchased from the Gypsy Trader in the Gypsy Camp, and augments and tattoos can be purchased from the Gypsy Stone Cutter and Gypsy Tattooist, respectively. It takes a considerable amount of time and money to increase the economy of the area.

There is a minor Albion Guard presence in the area, consisting of a Sheriff and one or two Guards. They patrol the main path from Bowerstone to Brightwood and occasionally go into the Gypsy Camp. They only appear after the Hero of Bowerstone defeats Thag.

The Arid Sea: This Demon Door is located on the way to Bowerstone, just on the left while traveling away from the Gypsy Camp. This sentient door claims to be the Greatest Playwright in Albion. This may be quite true, as Albion is not known for its great literature. Heroes should learn a few expressions to act out this door's grand play. The expressions required are: Laugh, Fart, Point & Laugh, Middle Finger, Vulgar Thrust, Growl, Bloodlust Roar, Worship, Dance and Blow Kiss. Inside the Demon Door there's a chest containing a Lucky Charm Augment

Home to the gypsies of Albion, the Gypsy Camp is dominated by a series of caravans. Items can be purchased here for relatively cheap prices. You can fast travel to this location.

The Tomb of Heroes[]

This dilapidated old ruin is inaccessible until the small pond dries up at the beginning of the quest Rescuing Charlie later in the game. It is located to the far side of Bower Lake, and is home to swarms of Hollow men. You can fast travel to this location.

This massive hill is found within Bower Lake next to the small tomb that marks the entrance to the former Heroes' Guild. It is also where the Cullis Gate is found that teleports one to the Chamber of Fate. Once the Three Heroes are assembled, this is also where the ritual takes place in order to claim The Weapon to destroy Lucien.

This cave is found behind Thag's Cabin. Minor loot can be found within.

This cave is located above the road to Bowerstone, along a narrow ridge that opens into a small wooded area overlooking the lights of Thag's bandit camp. Some loot can be found there.

There are four direct fast travel locations in this region.

Bower Lake is once again a location in Fable III, although it has changed much in the 50 years since the events of Fable II. The region is now called Millfields, and is home to the posh residences of Albion's elite, including Reaver. Bowerstone's expansion has rendered it a somewhat more civilized (and much less remote) location than before. It is now considered part of the greater Bowerstone area, and Page describes it as "the last piece of natural beauty remaining in Bowerstone". 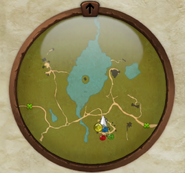