The Fable Wiki
Register
Don't have an account?
Sign In
Advertisement
in: Fable: The Journey Characters, Heroes

Blaze, called the Hero of Fire, is one of the Three Heroes Gabriel encounters in Fable: The Journey. Blaze's temple, the Forge of Fire, is found in the Lava Fields within Thorndeep.

Blaze was considered one of the greatest Heroes during the final days of the Old Kingdom, and came to be part of a trio of the Old Kingdom's other greatest champions known as the Three Heroes. During the waning days of the Old Kingdom, the Crawler, chief lieutenant of the Corruptor, attempted to invade Albion through a rift made between it and the Void by the recently finished Spire. Venturing to combat the foe, Blaze added his power to that of his companions in an attempt to close the rift and stop the Crawler. Unfortunately, while the group managed to close the rift, they could not defeat the Crawler, instead electing to imprison it within Shadelight dungeon, found deep within the faraway desert continent of Aurora. Furthermore, the destruction of the Tattered Spire released all of Albion's collected Will energy in a massive explosion, which turned the Three Heroes, Blaze among them, into Willstones, destroying the Old Kingdom in the process. An unknown amount of time later, the followers of the Three Heroes, known as the Enlightened, took the Willstone of Blaze and appropriately hid it within the Lava Fields, a part of the expansive Thorndeep forest found in the Edgelands, Albion's northern frontier.

Once the group escaped the Devourer, one of the Corruptor's weaker lieutenants, Gabriel and Theresa ventured to the Forge of Fire using the directions of their new friend and ally, Fergus. Approaching the temple, Fergus fought off native balverines while Gabriel passed a series of puzzles within the temple. Plunging his hands into the pool to retrieve the Willstone there, Gabriel gains the power of Fire, which greatly aided Blaze in his quest for justice and becomes an important weapon in Gabriel's quest to save Albion.

The statue of Blaze at the very first temple.

The power of Blaze given to Gabriel through the first Willstone. 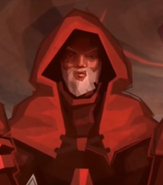 Blaze as depicted by Theresa.
Community content is available under CC-BY-SA unless otherwise noted.
Advertisement