Birthday Gift is the first main quest in Fable, Fable: The Lost Chapters, and Fable Anniversary.

Moral Dilemma: This quest contains numerous moral choices that must be made.

After a somewhat thrilling daydream of becoming a gallant knight, a powerful wizard, or an evil warrior - you're woken by your father, Brom. He reminds you that it's your sister's birthday, and you haven't bought her a gift yet! You're in luck; Brom will give you a piece of gold for every good deed that reaches his ears, and rumours travel like wildfire in Oakvale. However, the gold can also be earned through more illicit methods...

Down the path to Oakvale's centre is a small girl, Emily, who has lost her stuffed bear Rosie. The bear itself can be earned by completing The Bully. Once you have found Rosie, you can either return her to Emily, or give her to the bully.

In the small collection of houses on the left side of town, a large two-story house has a man, Orwin Gown, cheating on his wife behind it. If you talk to the man, he offers a reward if you keep quiet about the affair. However, standing in front of the Blacksmith's shop is his wife who is searching for him. If you tell her what her husband is upto,o she will thank you and tell you she will send a good word to Brom before storming towards Orwin's location.

If you take the neutral option, you can earn 2 gold, and may not need to do all of the remaining deeds.

On the hill to the right side of town are two children - the bully, and a small child resisting the bully's attempts to grab Rosie. Talk to each of them.

Approaching the cul-de-sac area next to the tavern will cause a man to spot you and ask to watch his stock while he answers the "call of nature". The child standing near the barns will ask you to smash the stock up to investigate the barrels' items.

Some barrels will have a beetle inside; however, they deal no damage and are easily dispatched with a few punches. The beetles and gold piece remain in the barrels even after the good deed, if you choose to break them.

Collect your gold from your father and talk to the trader standing to the left of the tavern's entrance. Buy the sweets from him for three gold pieces, then walk under Oakvale's bridge to the field where your sister Theresa is playing. Talk to her and give her your gift and walk out of the field.

Suddenly Theresa stops you explaining that something is wrong. A man runs through the village gates shouting there are bandits before he is shot in the back with an arrow. Theresa orders you to quickly hide to avoid being caught. You crouch in the field and silently watch from afar as the bandits raze your village to the ground and slaughter its inhabitants.

The bandits reach your home and the location of their target: you. Brom attempts to defend his home and family but he was not a warrior and was mortally wounded by Jack of Blades. The bandits tore your home apart in search for you and tortured your mother and sister for information of your whereabouts. They did not yield and so were taken away. 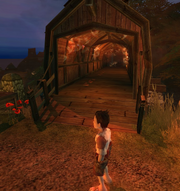 Oakvale is now crumbling. Buildings groan under the strain of burning wood and straw roofs. Screams and shattering glass echo through the night, and the path to the fields outside the town is blocked with destroyed fencing and bodies.

The path under the bridge is in the same condition, but the bridge itself is miraculously intact, if burning slowly down. Run across it to the burning carnage of your former home.

Coming across the bloodied corpse of your father, you are overcome with tears. Crying briefly into his red shirt, you look up as a stray bandit, screaming battle cry and holding a fearsome sword in his hand, makes a beeline for you. Suddenly, blue lightning arcs across the bandit's chest, and he drops with a sigh. A mysterious man in blue robes and with blue lines and markings on his face approaches, and after a few quick words, extends his hand.

You take it, and a blue ring of light surrounds you and the man. You vanish, leaving the corpse of the bandit, the corpse of your father, and your now dilapidated hometown behind.

Get your sister a birthday present. 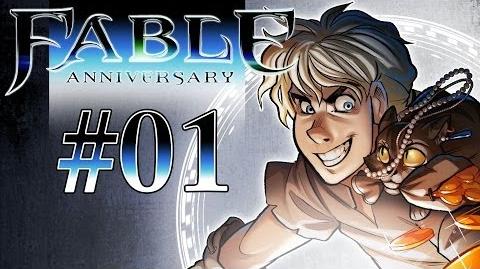