Battle Jack of Blades is the final quest in original Fable, not to be confused with The Final Battle in Fable: The Lost Chapters or Fable Anniversary.

At this point you should have Plate Armour, or at least Chainmail. Without it, Jack of Blades can inflict massive damage. It's also a wise decision to convert the rest of your EXP into your Strength, Skill, and Will as powerful skills. It is a good idea to take the Oak Longbow that you see on a dead hero before you walk into the Chamber of Fate. It's a weak weapon, but if you have nothing stronger, it is recommended you use it.

You get to fight Jack of Blades after you have defeated the Minions that spawn. Defeat them, and Jack will lower his protective shield. However, your Skill is somewhat obsolete here, so use spells like Battle Charge and Enflame and bash him with your sword to kill him. Don't run into him when he's swinging the Sword of Aeons as it causes a rather large amount of damage. After depleting his health to its last quarter, he turns into his final form. A good method is to use Slow Time, Berserk and Physical Shield. 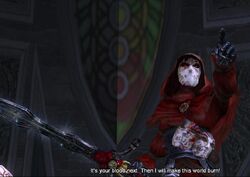 During this stage, Jack will summon endless Minions, and melee attacks are useless against him. Rocks emerge from the ground, which can be used as cover for Jack's two ranged attacks. There are two popular methods to use against him in this form to knock him out of the sky. It is a good idea to have a Multi Arrow spell. When he lifts his sword, and it starts glowing, dive behind one of the rocks. If not, it will decrease your Hit Points by a decent amount- about 12 per second.

Method A: The Matrix Method[]

The Matrix Method is named so because it involves the repeated use of Slow Time, though this method is used more by experienced players. As soon as you can move, immediately cast Slow Time and unleash a flurry of arrows or ranged Will Powers, dodging his powerful attacks when needed. If done correctly with a decently powered up Slow Time, you can take him out in little more than ten to fifteen seconds. (Less depending of the level of Slow Time, the bow used or the level of Will powers)

Method B: The Cover Method[]

This is a more basic method often used by first time players. Hide behind one of the rocks, and wait until Jack finishes his attacks. When he does, unleash a flurry of arrows or use strong, ranged Will powers. Evading his attacks successfully by hiding behind the rocks is sometimes difficult, because of Minion interruption.

Minions can easily be stopped using Ghost Sword. The swords will hit the minions, and lead them away from you while you can continue to attack Jack of Blades.

After watching his death, you finally walk up to your now conscious sister. You get the decision to either keep the Sword of Aeons and murder your sister to unlock its full power (Evil) or discard the Sword into the portal and rid yourself of it forever (Good). At the end of the bout, you will receive Jack of Blades's Mask. However, the game ends right then, and there you can choose to skip the scene. The story ends here in Fable, but in Fable: The Lost Chapters, however, there is more...