Barrow Fields is a small trader outpost between Darkwood and Oakvale in Fable, Fable: The Lost Chapters, and Fable Anniversary.

The camp is defended by a small number of guards, and has multiple fishing spots. There is a Demon Door who requests you to be "plump and porcine" to enter it. A man named Rhodri can be found here, standing by the lake thinking of suicide. He is related to the quest Investigating the Mayor. During The Sick Child quest, a blue mushroom merchant can be found here. You find the entrance to the Grey House here.

The camp is inhabited by a number of traders guarded by members of the 3rd Regiment Albion Guard. The villager Rhodri is added in Fable: The Lost Chapters. The names of the traders interchange between:

Barrow Fields seems to have been a small farm/village in the interim centuries between Fable and Fable II, before being swallowed by Darkwood, along with Oakvale. The new area is called Wraithmarsh and is filled with Banshees, Hollow Men, and Balverines. When you first go to Wraithmarsh, you start in the area that used to be Barrow Fields. 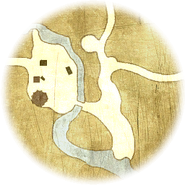