"You'll be positively betwazzled by the results!"

Barnum is a keen entrepreneur, always with a money-spinning scheme, who makes several appearances during Fable II. He has an unusual vocabulary, which he attributes to his purchase of a thesaurus from Mystical Murgo; he frequently uses ridiculous or made-up words in conversation.

He is first met during your childhood, in which he pays Rose and The Hero of Bowerstone a gold piece to pose for his photography demonstration. The picture can be ruined by making a rude gesture.

Following the death of Rose and Sparrow's subsequent ascension to Hero status, he is encountered in Oakfield, where he purchased the Rookridge bridge and planned to set up a toll. The bridge is destroyed by a gang of bandits, led by Dash, who intend to take over Rookridge. After the bandits are dispatched, he gives the Hero his thesaurus as a reward, and explains that his deeds were revealed to be invalid; this negates the toll scheme, but frees him from the responsibility of rebuilding the bridge.

He is met again in Westcliff for the Westcliff Development quest, in which he seeks a 5,000 gold investment in order to transform the camp into a family-friendly tourist attraction. If the player pays the investment before leaving for the Spire, it will be repaid following their return, plus interest, for a total of 15,000 gold; the region itself will have been turned into a successful tourist trap. During this time, it seems he starts up the picture box business again, and works with Farmer Giles and takes a picture of his son.

Barnum's final appearance is at Bloodstone Manor, where he is shot by Reaver when the latter discovers it will take three months to "developorise" a photograph. 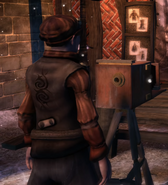