Avo's Tear is an ancient sword said to be as powerful as the legendary Sword of Aeons. It is available in Fable: The Lost Chapters and Fable Anniversary, and can be obtained from the quest The Hidden Sword.

This Sword was imbued with extraordinary power when the Guild Mage Solcius used it in a spell to close a large vortex. For a long time, it has existed only as a myth among acolytes. Its strength rivals even the Sword of Aeons.

The sword was originally only the sword of a common guard until Solcius, the most powerful Guild Mage to ever live, used it as a focus point to close a vortex that threatened to engulf Bowerstone. The sword disappeared soon afterwards. Knowledge of it soon fell into legend until Maze started searching for it as a means to fight against Jack of Blades. Maze however failed to retrieve it because he was not deemed worthy of its power. Later, if the Hero of Oakvale throws away the Sword of Aeons, he is given a chance to acquire the sword. He is judged by three of the most powerful Heroes to ever live: Solcius, Delfe, and Holdr. They deem him worthy and give him Avo's Tear.

Apparently, Nostro, the founder of the Heroes' Guild, ordered the design of two important objects in Albion: the Witchwood Arena, and Avo's Tear. It was modelled after the Sword of Aeons, which had disappeared by that time. This is according to the Tales of Albion at Lionhead.com. 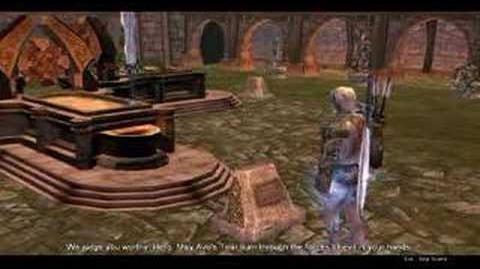