The Arena Waiting Area is a location in Fable, Fable: The Lost Chapters and Fable Anniversary. It is a room inside the Arena where participants wait or rest and train. In the middle of this room there is a small shop where the player may buy weapons, armour, food and potions. The items on display may be stolen if guile is high enough. There is also a man with whom the Hero may play Blackjack.

A hall in which Arena fighters prepare for battle, and injured warriors rest.

The two Guards, named Bert and Al, who you must talk to enter the Arena have a series of puns that relate to what type of enemies you'll be fighting next:

Al: Ah, round one. They always tell me this one gives them the biggest buzz.
Bert: Buzz, hee hee, that's a good one Al. Buzz. Funny.

Al: Second round, eh? Make sure you don't get mobbed out there.
Bert: Mobbed by Hobbes. Ha ha. Funny that.
Al: Right, Bert, that's enough, come on through.

Al: Third round now. It all starts getting a bit hairy.
Bert: Oh I get it... Very hairy, yeah. Funny, Al.

Al: Do you know, the next round is so tough we might have banned it!
Bert: Banned it? Sounds like Bandit! Ha ha! Hilarious!

Al: Who'll win the next round? I'd bet the Earth on the next beast.
Bert: Ha ha. Earth. Earth Troll. Ha. Funny

Al: The next round will kill you Stone dead!
Bert: Stone! Yeah, Stone Troll. Brilliant, that. Very funny.

Al: I heard his round has a real sting in the tail.
Bert: Sssh, don't give away any secrets!
Al: Oh yes. Sorry. Nearly spoilt it, didn't I?
Bert: Er, you better go in.

A balverine is held captive near the door that leads to the arena; if you kill it, NPCs react as if you killed a villager, since it is technically a non aggressive AI. 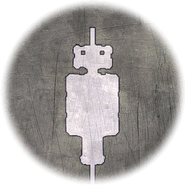 Minimap
Add a photo to this gallery
Retrieved from "https://fable.fandom.com/wiki/Arena_Waiting_Area?oldid=147565"
Community content is available under CC-BY-SA unless otherwise noted.