The Arena, also known as the Witchwood Arena, is a location in Fable, Fable: The Lost Chapters and Fable Anniversary. It is located in Witchwood. Here, Heroes and adventurers from far and wide came to test their mettle and prove their worth.

A place where Heroes, creatures and others battle.

After the fall of the Old Kingdom, Albion still found itself inhabited by Heroes, men and women of great power who were equally capable of performing great good or horrible evil. During the anarchist period and the ensuing Fallow Wars, the clashes of these Heroes became something of a legend.

Then arose Albion's would be saviour: Nostro, a bandit hailing from the east who, under the tutelage of Scythe, sought to unite all of Albion once more. During his rule, he forced a peace on the people of Albion, utilizing the newly-organized Heroes' Guild to do so. These Heroes still clashed, however, so Nostro commissioned in response the Witchwood Arena - a giant Colosseum for the intended use of being a venue in which anyone could settle disputes in public. Eventually, these bouts were arranged in advance, and people would come for miles to watch the duels.

However, under the sway of his power-hungry wife Magdalena, the Arena was debased into nothing more than a popular source of entertainment. Creatures were eventually brought in for the would-be Heroes to duel in combat, and even after Nostro died, his Arena continued to grow in fame.

The Age of Heroes[]

Centuries after Nostro's death, the Witchwood Arena continued to serve as Albion's greatest attraction, serving as an outlet for aspiring Heroes to grow their fame. Most famous were the Arena Champions who never took a break in between battles, though only Jack of Blades and Thunder were counted among them.

The Hero of Oakvale, descendant of William Black, eventually sought to grow his fame through participation in the Arena. After slaying a White Balverine, the Knothole Glade Chief saw fit to sponsor his entrance in the Arena, where he fought for the masses next to his childhood friend/occasional rival Whisper. Battling through the rounds together, Jack of Blades eventually called upon the two Heroes to duel to the death after the duo slew the mighty Arachanox. Whisper was defeated in this battle, although it is the choice of the individual player to slay her or not.

The End of the Arena[]

Between the events of Fable and Fable II, Heroes were seen as a blight on Albion and were hunted down. The Witchwood Arena saw prominent use in these dark days, utilised to execute captured Heroes. Some attempted to fight for freedom, but regardless of whether they won or lost, they were burned on the Pyre.

The Arena as seen from the world map

Entrance to the Arena 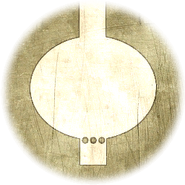 Fable The Lore Behind The Witchwood Arena