Archon's Folly, also known as Dragon Cliff, is the northernmost point of Albion, where your final fight against the dragon form of Jack of Blades takes place in Fable: The Lost Chapters and Fable Anniversary. The appearance of the place is simply a medium-sized platform surrounded by lava, in an almost infernal setting, which is fitting for the villain who resides here. It is also the location where the Hero must choose whether to destroy Jack of Blades's Mask by throwing it into the lava, or ignore Scythe's warnings and allow the mask to take control of the Hero.

The fabled land beyond the Bronze Gate is said to be inhabited by demons that will bring about the end of time. 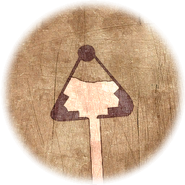 The Hero on Archon's Folly