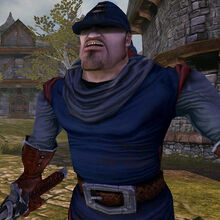 Albion Guards keep the peace in Albion and have been the protectors of the cities of Albion for a long time.

"I've got my eye on you.
Don't try anything stupid.
Don't go breaking any laws.
It's just a flesh wound.
Get yer finger out, pussbag!""

No one knows exactly when the guards were established, though they were probably introduced for the defense of all towns from bandit or balverine attacks. In the otherwise decentralized and unorganized Albion, the guard were a unified body that served the whole nation. They kept peace and order in every single settlement in Albion, though in early days, they didn't patrol the countryside and there was no one to protect those outside of towns. Guards were kind and appreciative towards pure heroes and were hostile towards evil ones. Guards were a part of the final fighting force arranged by the Guildmaster in the final battle against the evil hero, Jack of Blades. Guards were trained and recruited at an institution known as The Guard Academy. After the fall of the Heroes' Guild, they were still the ever-vigilant keepers of justice as they usually were, continuing with their duties for hundreds of years. They gradually expanded and began to patrol the countryside between cities.

After the Hero of Bowerstone became the monarch of Albion, the guard swore their allegiance to the throne, eventually evolving into Albion's Royal Army. The Army was still known as the "Old Guard", and, in addition to fulfilling the role of an Army, it performed traditional guard duties, such as dealing with crimes, criminals and prisoners, and maintaining public security and order. During the reign of Logan, the Army's guard duties and budget were cut in order to build up the Army to defend against the Crawler. A large portion of the Army known as the "Swift Brigade", the men of Major Swift and Ben Finn, sided with The Hero in the revolution against Logan, and fought against the Royal Guard in the Battle for Bowerstone. Their allegiance came after the Hero promised to restore the Old Guard and place Major Swift in command of the Army.

In Fable II, you will personally know one guard from your childhood called Derek. He is the guard who loses the arrest warrants and asks you to find them for him. Giles is a former Bowerstone guard, who became a farmer when he retired. He lives in Brightwood.

In Fable, there are three known types of guards: Blue Guards of the 3rd Regiment, Red Guards, of the 4th Regiment, and the Black Guards of the 5th Regiment. In TLC there are also guards in orange overcoats. There are also the corrupt and evil guards of Bargate who have their own unique uniform. The only noted guard in Fable is the Bowerstone Sheriff who also has a unique uniform and is located in Bowerstone North. He is involved in the Investigating the Mayor quest in Fable: The Lost Chapters. Snowspire Village has its own unique guards as well; they wear white uniforms and are the toughest guards in the game.Sometimes guards may spawn off the map (like outside the fences in Oakvale). They can still attack you with their bow if they can get a clear shot but so can you.

Also known as Blue Guards, these guards are commonly found in small towns, such as Oakvale and Bowerstone, as well as guarding traders through dangerous locales, such as Greatwood. They can easily be identified by a blue uniform, and typically wield a longsword and a crossbow. They are difficult at first for a starting hero, though against an experienced hero they are easily defeated. In towns, should a number of 3rd Regiment guards be killed, the 4th Regiment will replace them.

The 4th Regiment are the second tier of guards, only found default in Knothole Glade and the Darkwood Bordello. They are stronger overall than the 3rd Regiment and may pose as a challenge to a moderate player, though they can easily be overwhelmed by any experienced hero.

Only found by default in Hook Coast, the 5th Regiment are the highest tier of guards. Notably bulkier and stronger than any normal guard, these guards can take down even an experienced hero if careless. They are the final line of defense if the 3rd and 4th Regiments in towns are slain in battle.

These guards are found in Snowspire Village in Fable: The Lost Chapters and are about as powerful as the 5th regiment. 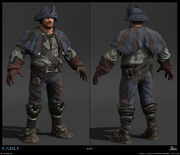 In Fable II, there are only three types of guards: Normal Guards, Sheriffs, and High Guards.

The guards you see in almost every town. They are weak and pose almost no threat to an experienced hero. They wear brown uniforms and carry iron katanas, iron longswords, and iron flintlock pistols.

They wear white coats and are taller then regular guards and can take slightly more damage. They pose no threat to a moderate and above hero unless careless. Beginners will have some difficulty defeating them. They carry iron katanas and iron longswords, with iron flintlock pistols.

High guards are much stronger than normal guards and cannot be knocked off their feet unless killed. They wear a light blue-white uniform and carry steel katanas, and steel flintlock pistols. Although they're strong, they are no match for an experienced hero. For moderate and beginners they may pose somewhat of a threat, unless they play smart. High guards are slightly bulkier than normal guards and wear brighter uniforms, and can take many more hits than normal guards and sheriffs. These guards typically patrol only the gardens of Castle Fairfax but are occasionally seen in the lower part of Bowerstone, looking to enlist heroes in bounty hunter or slave rescue quests. Also, if you kill enough guards in a region, the high guards will come after you. 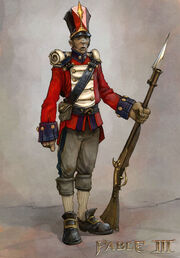 In Fable III, the Guard has evolved into the Royal Army, also known as the "Old Guard". They are still primarily responsible for guard duties throughout Albion. Soldiers wear red coats and shakos.

The Royal Guard of King Logan is made up of elite soldiers who are distinctively different from that of the Royal Army, and are considered separate from the "Old Guard" by regular members of the Army, most notably Major Swift. Royal Guards wear purple uniforms, powdered wigs, large tricornes and ornate metal masks that protect and conceal their faces.

Ravenscar Keep is also guarded by elite soldiers, though they are distinctively different than the Royal Guard. Their uniforms are identical to Royal Guards, but they wear black uniforms with sleeve patches that resemble a cage or prison cell.

Retrieved from "https://fable.fandom.com/wiki/Albion_Guard?oldid=149254"
Community content is available under CC-BY-SA unless otherwise noted.