The Fable Wiki
Register
Don't have an account?
Sign In
Advertisement
in: A Hero's Tale, Fable II 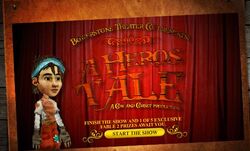 A Hero's Tale was the online mini game at fable2.xbox.com that followed the story of a young boy. It can be considered a prequel to Fable II, since the rewards obtained through this game can be collected in a chest in the Guild Cave in Fable II.

The story is presented as a Cow and Corset production by the Bowerstone Theater Co. It shows the story of a boy whose family is killed by a White Balverine and how this boy tries to hunt down the beast. The boy grows up to become a hero, and the player may choose if he is a good or evil character. The player also chooses to help one of three different women and subsequently marry her. Ultimately the player can choose a crown which, if the player has Xbox Live, will allow items to be sent to your account by means of your email address. There are three crowns to be chosen, one is a crown that is completely made out of wood and has a small crown carving on it, the second is a royalty like crown, encrusted with jewels and being made out of gold, while the last is a more evil looking one, with spikes adorning from it.

This tale is set initially in the vicinity of Bowerstone, where the hero sees a young Arfur being chased by Giles. Afterwards, it is set in a new town, unseen in the Fable games, called Southcliff. At the end of the tale, it is explained that the hero hid his treasure in a cave so that one day his descendants could find it. This treasure is found in the chest in the Chamber of Fate. Although this is a mini game, it has been voiced by the same person who voiced Theresa, Zoe Wanamaker, this most likely said past events about 10 to 20 years before the hero in Fable II was born, because it seemed Arfur was a child, and Giles seemingly in his early twenties. Being so close to the events of Fable II, this could mean that the Hero of Southcliff is the Hero of Bowerstone's father.

The website for the puppet show has since been closed down. However, it was still possible to obtain the items from http://fableservice.lionhead.com/experience/ for a limited time. This site now has a message which confirms the final closure of the service: Unfortunately, after almost four years it was time for us to close down the Fable II chest in the Chamber of Fate. Have fun in Albion! (As of 2021, there exists no possibility to obtain these items unless via trading with another player online who already has the items.)